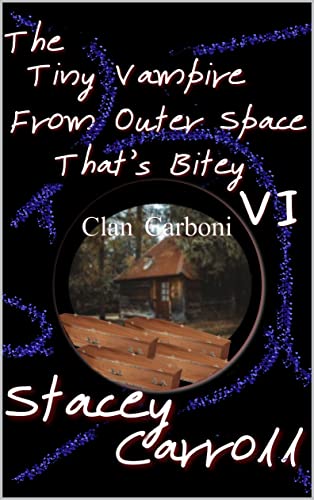 The homeless shelter is renovated and ready to open just in time. They have less than a month of bloodbags left, but circumstances on Earth have proven more challenging than they expected. Marcus hopes that moving them deep into the woods outside Beach City will provide them the shelter and safety they need to create their food and start Clan Carboni

Marcus walked up to the front door of their homeless kitchen. There were a few homeless loitering at the entrance. Marcus watched them for a moment. They were unwashed, but Marcus couldn’t help them with that tonight. He didn’t have anyone to monitor the upstairs, so he asked. “Have you eaten?”

“The food is this way. I believe I smell lamb chops and mashed potatoes.” Marcus opened the door and motioned toward the dining room.

“I am serious. Follow me.” Marcus led Shadow and the two homeless men into the dining room. He spotted Oliver dishing mashed potatoes near the middle of the buffet they had set up in the dining room. “I found two more.”

“The front of the line is down there.” Oliver pointed. “Sylvia was managing the front but we ran out of lamb chops. She’s cooking some more.”

“Looks like a good turnout,” Marcus said. He counted twenty-five eating in the dining room.

“It just picked up. I think word is spreading as they leave,” Oliver said. “This may have been a great idea to open at night. A lot of these guys said the last kitchen in the area closes at five, and if you aren’t there by three, you’re not eating.”

“Is that early?” Marcus asked.

“Let them eat as much as they want,” Marcus said. “We’ll keep this schedule. “We’ll open from nine to midnight.”

“That’s fine. That’ll give us time to clean up and still be in bed by two or three in the morning,” Charles said.

Sylvia walked out of the kitchen with a large pan of lamb chops. “These are finished. Did I just hear we’ll be opening from nine to midnight?”

“It’s fine with me, but when would I clean your house?” Sylvia asked.

“Hopefully, we’ll have a few volunteers,” Marcus said. “And you won’t be forced to serve food every night.”

“A group just walked in,” Shadow said. “Do we need to help?”

Marcus looked toward the front of the building. “Where can we help?”

“If you could serve the lamb chops, Marcus. Shadow, the rolls,” Sylvia said.

Shadow stepped behind the table and put two rolls on every plate that passed her.

Marcus placed a lamb chop on every plate with a pair of tongs. It took them about ten minutes to serve the fifteen people that walked through the door. “How many do you think we’ve served?”

“We could set up movies they could watch while they eat,” Shadow said.

Marcus chuckled. “She’s not being entirely unselfish in her suggestion. She wants to watch a movie while she passes out rolls.”

“It’s fine. How much does it usually cost?” Marcus asked.

“For a TV and movie service? Not much,” Charles said. “I still have some money leftover from the door. I can do it with that.”

“We need to open bank accounts for them,” Oliver said. “We need a way to pay them.”

Marcus looked at the clock on the wall. “Oliver and I need to go. Can you guys handle this?”

“Thank you.” Marcus walked outside with Oliver. “We need to go behind the building.”

Oliver walked behind the building with Marcus then stepped through the portal. When he stepped out, they were in front of the cabin. “Where are the supplies?”

“Inside,” Marcus said. He stepped onto the porch and opened the door. Most everything he’d taken last night was in the living room. The rest of it was in the barn.

“Judging by the fixtures, that seems about right,” Oliver said.

“My plan is to use the Romodelator first. Whatever it doesn’t restore, we’ll replace,” Marcus said. “Materials we don’t use will go in the barn.”

Marcus pulled it out of his back pocket. “Right here. It’s about half a million Empyrean dollars, so I didn’t want to leave it here.”

“We couldn’t have bought this even if we wanted to.” Marcus looked at the settings. “Let’s see what this looked like originally. We can make changes later.”

“That’s fine with me,” Oliver said.

Marcus set it to the standard setting. “Stand back. Let’s see what it does.” He aimed at the living room wall and squeezed the trigger.

A beam of light shot from the end of the gun. Marcus winced.

Oliver shielded his eyes. “Not what I expected.”

“Nor I.” Marcus squinted as he aimed the gun, fanning it across the wall. “I should have gotten us some sunglasses.”

The rotten wood slowly unaged. The black mold disappeared. The discoloring stains faded. The rot healed and the woodgrain reformed.

“That would have taken at least a night to replace,” Oliver said.

“It took this thing less than five minutes,” Marcus said.

“Do the rest of the room,” Oliver said.

“You better stay behind me.” Marcus aimed the gun and slowly moved it across all the walls in the living room.

It took him an hour to do the bottom floor and two hours to do the top floor. Marcus found out the hard way that the worse the damage, the longer the Remodelator had to be left on the area.

“Healed,” Marcus said. “But I’m starving. We have to stop for the night, or I won’t be able to get us home.”

“That’s fine. I’m sure the girls are at home either playing cards or watching a movie,” Oliver said.

Marcus listened to the Bond. “Cards, I think.” He opened a portal and waited for Oliver to step though.

Marcus landed in the living room. As predicted, Shadow and Alera were playing cards in the kitchen.

“Already have the bags in the microwave,” Oliver said.

Marcus sat down on the couch and removed his shoes. He looked at the bottom of the right shoe. It was destroyed. “Damnit.”

“Hit it with the Remodelator,” Oliver said.

Marcus pulled the Remodelator out of his back pocket. He aimed it at his shoe, depressed the trigger and waited three seconds. Then, he released it. He set the device on the end table then examined his shoe. “That worked.”

“I made you a double-glass.” Oliver walked into the living room and handed it to Marcus.

“Thank you.” Marcus drained the glass in three swallows.

“Do you need more?” Oliver asked.

Shadow walked into the living room. “What happened? You never drink that much.”

“Put my foot through the second floor,” Marcus said. “I’m fine, and I just fixed the shoe, but I was starving.”

“The cabin is looking good. I think we’ll have it mostly done by the end of tomorrow night,” Oliver said.

“I think we ended up with about sixty homeless for the night,” Alera said. “If you two just want to go to the cabin tomorrow night, Shadow and I can handle the homeless shelter.”

“That's fine with me,” Oliver said.

“They wouldn’t let me lick the lamb chops,” Shadow said.

Marcus grinned. It wasn’t funny that she wanted to lick the lamb chops, but the image of her doing it was hilarious. Vampires hated cooked food. The smell. The texture. It was all terrible, and they certainly couldn’t eat it. But Shadow’s love of those lamb chops in any form meant they were on the right track for a good food supply. “If you lick them, no one will want to eat them.” He looked at Alera. “Did she get some marrow mix?”

“I made her some fresh marrow mix once we were done,” Alera said.

“You can have more marrow mix once you’re done tomorrow night,” Marcus said.

“I plan on making a lot more. It seems to work really well,” Alera said.

“I’d like to eventually start working on bloodchocolates and bloodwine as well,” Marcus said.

“I’m sure we could figure that out,” Alera said.

“Let’s all reconvene late tomorrow night once we all finish our projects,” Marcus said.

“We’ll be done about one, maybe sooner,” Shadow said.

“Let’s say one in the morning then,” Marcus said.

“We can do that,” Alera said. “Let’s go home so I can work on some more bone broth.”

Marcus opened a portal. He closed it once Oliver and Alera were through then looked at Shadow. “How are you feeling?”

Marcus laid a land on her abdomen. “It’s going to be a strong vampire. Are you sure you feel okay?”

“I’m just chronically hungry with this one,” Shadow said.

Marcus offered his wrist. “Have a bite. Let’s see if it helps.”

“You were just injured,” Shadow said.

Shadow sank her fangs into Marcus’ wrist and drank deeply.

Marcus let her drink for three minutes. “How do you feel now?”

Shadow pulled off his wrist. She inhaled and licked her fangs. “That’s better.”

Marcus kissed her. “That is definitely my son in there.”

“He needed your blood,” Shadow said.

Marcus resumed kissing her. “Let me eat and shower. Why don’t you put on that little outfit you got with Alera?”

Shadow grinned. “In a mood?”

Marcus drug her hand down to his loins. “I just might be.”

Shadow felt along his cloth covered erection. “Where do you plan to stick this?”

“I’ll find that outfit.” Shadow walked into the bedroom. She found her red lace nighty in the closet and laid it on the bed. Then, she undressed. She found her stockings in her dresser and the heels in the bottom of the closet.

By the time she had everything collected, Marcus was walking into the master bathroom.

Shadow put on the nighty. She was surprised it fit. She had to be distended at least four inches. Then, Shadow put on the stockings and heels. She wished she could see herself in the mirror, but she was certain Marcus would like it.

Now, she just needed to decide where she wanted to display herself. Shadow decided the padded lounge chair would be best. He’d see it just as he walked out of the bathroom.

He stepped out of the bathroom to see Shadow sprawled in the chair. If he’d been alive, he would have lost his breath. She was stunning. He slid his eyes over her. Her little nighty stopped high on her thigh. The bodice was low and sheer enough that he could almost see her nipples but not quite, and that simply made his mutto harder.

Shadow grinned. Marcus was emitting a low growl. It was a primal sound, and she could tell he was extremely aroused.

Marcus removed his towel and tossed it on the floor. He was barely dry, but it didn’t matter. “You are stunning.”

“Even with a distension,” Shadow said.

“More-so with it.” Marcus stood in front of her. He’d never pegged himself as having a distension fetish, but he loved watching her little bulge. He slid his hands up her thighs to her hips then leaned forward and kissed her passionately.