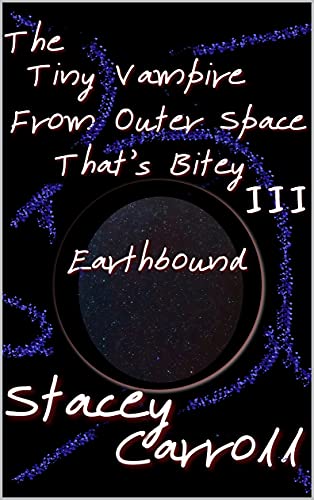 After nearly being imprisoned on Chivitas for being Umbra vampires, Marcus and Shadow escape the hostile planet with their friends, Oliver, Alera and Alba, in Marcus' homebuilt spaceship. The quarters are cramped. The ship is rickety. can they make it to Earth before the ship comes apart?

Alera listened to the sounds coming from the front bedroom. She wished Marcus and Shadow would have chosen the back bedroom. Any time she wanted to leave hers, she had to make sure they weren’t in their bedroom, and right now, the door between her sleeping room and theirs was closed.

She turned her head when there was a knock on the rear doorframe between her room and the cargo hold. It was Alba.

“Are they still occupied?” Alba asked.

“Not sure. They were talking. Then, I assume being intimate. I heard some growls. It’s pretty quiet now, but the door isn’t open.”

“Are we going to get trapped back here every time they want to connect?” Alba asked.

“Probably,” Alera said. “It’s been quiet for a few minutes. I’m going to risk it.” She unlatched the door as quietly as she could and opened it. Marcus and Shadow were on the bed. [They’re asleep.]

Alba stepped into the doorway. [Passed out. Look at all that blood.]

[Looks like Bonding,] Alera said as she examined the streaks covering their shoulders and running down their chests.

[I thought they were already Bonded,] Alba said.

[So did I, but they both have healing neck wounds,] Alera said.

[He filled her sacs before they Bonded. That’s almost unheard of,] Alba said.

[He’s a huge vampire, and her sacs are ready,] Alera said. [They probably couldn’t help it.]

[I used to work in an Expellery,] Alera said. [Most sacs I helped expell had to have a rookery. They were not hangable. The cords were short, and the sac walls were thin. You could hang hers.] She moved through the bedroom and opened the next door.

Oliver turned around when he heard a door open. Alera and Alba were making their way through the food chamber. [Are they asleep?]

[They are very asleep,] Alera said. [I think they Bonded.]

Oliver blinked. [I thought they were already Bonded.]

[So did we, but they are passed out with neck wounds,] Alba said.

[If that’s the case, they’ll be out for a couple hours. They have to process each other's memories, and it can take some time for the Bond to form,] Oliver said. [Close that door. Give them some privacy.]

Alera closed the door between the food chamber and Marcus’ and Shadow’s bedroom. “How’s it going up here?”

“We’re up to lightspeed eight. Estimated time, six to seven months,” Oliver said. “By the time we get to ten or eleven, it should be one to two months, assuming everything goes correctly.”

“It’s going to be a long two months,” Alba said.

Oliver chuckled. “Better than starving on Chivitas and getting harassed by Elder Guards. We’re going to be on this shuttle for so long that eventually, they won’t care if you walk through while they’re doing the deed.”

“You’d think he would have wanted to be closer to the rookery,” Alba said.

“Shadow has unique feeding needs,” Oliver said. “He wanted to keep her close to the food.”

“Have a seat,” Oliver said. He motioned to the other two chairs. “It’s nice up here.”

“How close will we get to any suns?” Alba asked.

“Not close enough to bother us.” He motioned. “There’s two out there, but we’re so far away, they don’t matter.”

“What about the moons?” Alera asked.

Oliver laughed. He knew where she was going with that question. “We don’t know. When I was working for the space program, they weren’t even considering researching the ability to have mated childer aboard a ship. They didn’t think it was a high priority. The moon is the trigger, but they’ve never figured out the other factors, and those other factors may not be present in space.”

“I’ve always thought it’s a combination of the moon cycle and tides,” Oliver said. “Even the research supports that. The closer you get to any large body of water, the more instances of mated childer.”

“Sorry to change the subject,” Alera said. “But what do we know about Earth and Earthlings?”

“Marcus would be the one to ask. He spent two or three nights with them during their transport to Chivitas,” Oliver said. “I know they’re alive. Technically, we’d consider them food, but it’s long since been rumored that their blood is poison to us.”

“Has anyone tried it?” Alera asked.

“Well, here’s the kicker. Marcus and Shadow can drink it,” Oliver said. “Marcus tolerated it fine. Shadow said it upset her stomach.”

“Shadow is still in her pukey years,” Alba said. “What else did Marcus say about it?”

“He said he didn’t like the way it tasted, but it did what it was supposed to do,” Oliver said. “He thinks he can create a distillation process to make it more palatable.”

“And he thinks we’ll still have bloodbags left when we land?” Alera asked.

“He stocked four months. He’s assuming we’ll land in one to two months. That would give us another one to two months of food while he figures out how to make Earthling blood tolerable to drink,” Oliver said.

“Do you hear movement?” Alba asked.

“Alera, check on them,” Oliver said.

Alera walked over to the door between the food room and the first bedroom. She cracked open the door. [They’re moving. Alba, get two bloodbags.]

Alba grabbed two bloodbags out of the refrigerator and handed them to Alera.

Alera quietly stepped into the bedroom. She saw Marcus open his eyes. She held out a bloodbag. “Marcus, you have to feed.”

Marcus blearily took the bloodbag and drained it. He inhaled and looked around.

Marcus slid the straw into Shadow's mouth and watched as she sucked it dry. Then, he pulled her into his arms.

Alera closed the door and turned back to the control room. “He’s still dazed, and she’s asleep, but they’re both fed.”

“What would they do without us,” Oliver said.

“Probably leave the damned thing on autopilot with no monitoring,” Alera said.

“They might have made it, but I’ve had to make a couple manual corrections,” Oliver said. “Nothing major. Just don’t want to get too close to any gas giants or stars.”

“Is that our path?” Alera asked.

“It is. He loaded a star map,” Oliver said. “That’s tracking where we are, and where we’re going.”

“Is that connected to the autopilot?” Alera asked.

“Unfortunately not,” Oliver said. “But it is tracking us accurately. It also shows any large objects that may get in our way. Hence, the manual corrections.”

“He did an impressive job with this,” Alba said.

“Especially when you consider that he built it in three weeks,” Oliver said.

“I don’t think it’s been that long,” Alera said. “They moved in about…” She did the mental math. “No, three weeks would be about right.”

“Did he remember to put any entertainment on this ship?” Alba asked.

“I do not know. There might be something in the cargo hold,” Oliver said. “But I’d wait until they wake up.”

“At least we have a nice view,” Alba said.

“And we can still get to the food,” Alera said.

“Are you sure you don’t have a deck of cards, Alera?” Oliver asked.

“Oh, I might.” Alera stood. She quietly made her way to the back bedroom and dug through her purse. At the very bottom in a side pocket, she found a deck of cards.

Alera snuck back to the control room. She closed Shadow and Marcus’ door and sat down in her chair. “I found a deck of cards.”

“The last time I went to buy the digital cards all the reviews said they cracked,” Alera said. “I’ve had these for two-hundred years. They’re a little worn, but they still work.”

“These are fine,” Alba said. “I just hadn’t seen a set like this in a while.”

They spent the remainder of the evening playing poker and monitoring the computers.