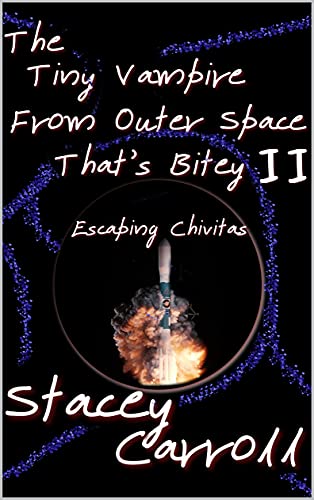 Due to the Earthing's fear of fanged creatures, Shadow and Marcus had to make an unscheduled landing on Chivitas, a planet of telepathic vampires who hate shadow-wielders. Marcus is determined to build a spaceship to get them to Earth where there is abundant food, and they can raise an undead family. Can he do it before they are captured by the Elder Guard simply for being Umbra?

Rafal listened to his radio intercom as he sat in his car and filed his latest report. A business owner in Iria was shorting the Elders by misrepresenting his sales. Considering it was a ten-thousand gold piece a month business, the Elders were understandably furious. All businesses owed the Elders thirty percent of their profits. This owner had stated he only made five-thousand a month, which meant he’d been paying the elders 1,500 a month when he actually owed 3,000, and it’d been going on for years. The man now owed the Elders over a million gold pieces, and he owed that million in the next 30 days, or Elder Guards would be sent to take it over. The owner would be sent to the dungeons until the debt was paid.

The tax problem didn’t bother Rafal. What bothered him was the information coming over his intercom. A team of 30 Elder Guards had two suspected Umbra vampires pinned down in a house in Nova, which was two towns from his current location. The town was critical since it housed one of Chivitas’ space and rocket research centers. They couldn’t have Umbra vampires killing their best scientists and engineers as a food supply.

Rafal finished his report and sent it just as he heard the Captain give the order to take the house. Then, he heard a howl. Rafal cringed. That was a very angry Umbra vampire. The rest of it was garbled. Rafal thought he heard a no. Sounds of breaking bones, and someone yelling that they’d interrupted an expellation.

Rafal triggered his intercom, gave his name, rank and badge number and ordered them to fall back. Rafal cursed as he heard more sounds of vampire bones breaking. If they’d interrupted an expellation, the howl he heard was the male, and that Umbra vampire wouldn’t just be pissed, he’d be frenzied.

Rafal recognized that as the captain’s voice. “Get off the property! He’s protecting his Bonded and new childe! Who the hell did the goddamned recon!? How did they not know she was about to expel?” If there was one thing he knew as clear as the full moon, you never wanted to interrupt a mated pair during an expellation.

“Were you listening to Nova, Rafal?” an Elder asked.

“The recon said the female was a childe,” the Elder said.

“Either way. They missed the fact that she was about to expel,” Rafal said.

“I ordered them to fall back, but it was too late,” Rafal said. “What do you want me to do?”

“Get to the house. See if you can find the female and locate the childe,” the Elder said.

“They won’t be there by the time I get there,” Rafal said.

“Check it anyway and report back.”

“On my way,” Rafal said. He ended the communication and sighed. He hated when this shit happened, and he hoped that sac was in one piece. If not, they could count on more hell from these two Umbra vampires.

It was a two-hour drive to Nova. Rafal parked outside the house and listened. He heard nothing. The yard looked clean. He stepped out of his car and cautiously approached the front door. It was closed. Rafal turned the handle and pushed it open. “Elder Guard! Entering through the front door!”

Oliver stepped into the living room from the kitchen. “I’m not who you’re looking for. I’m just cleaning up the mess.”

Rafal looked at the man. “Who are you?”

“You were hired to clean up the mess?” Rafal asked.

“I don’t know. He paid me to clean this and left,” Oliver said. “I assume he went to find his Bonded.”

“She’s not here either?” Rafal asked.

“He sent her away during the commotion,” Oliver said.

Oliver motioned to the kitchen.

Rafal walked through the door and looked around. It was still a mess, but he could see where they’d been cleaning. Along the far wall, he saw a crushed sac. “Shit.”

“Tell the Elders they did a great job here. Now you have an extremely pissed Umbra vampire on the planet, not just a hungry one,” Oliver said.

“Hungry’s got nothing on this,” Rafal said as he took another look around the kitchen. The sac was haunting. “Is that red hair?”

“You not only killed their childe, you killed a rare one,” Oliver said.

“You wouldn’t tell me if they came back, would you?” Rafal asked.

“Not a chance in Hades,” Oliver said. “You killed their childe.”

“I figured,” Rafal said and cursed. He ran his hands through his black hair. “Damnit. Damnit. Damnit.” He looked at the vampire cleaning the kitchen. “Did you know she was about to expel?”

“When did you notice?” Rafal asked.

“You can’t miss that,” Rafal said.

“Nope,” Oliver said as he prepared a bucket of water and bleach.

“They were waiting for that for 50 years. I would think not,” Oliver said.

“Give them my condolences anyway,” Rafal said. “We’re not here to final childer. We just can’t have them here because they’ll eat our food supply.”

“They were just trying to find a safe home for their family,” Oliver said. “Tell that to your Hadesdamned Elders.”

“I have,” Rafal said. “We all know Umbra is running out of food.”

“What’s your report on this incident?” Oliver asked as he dunked the mop in the bucket.

“I didn’t find anything here,” Rafal said. “Not even you.”

He turned and walked out of the house. Rafal stepped into his car and triggered his intercom. “The house was empty.”

“No male. No female, and no childe?” the Elder asked.

“The childe is finaled,” Rafal said. “Crushed against a wall.”

“Did it look deliberate?” the Elder asked.

“It looked like our guards knocked it out of his hand. They're fragile when they first emerge.” Rafal waited while the Elder contemplated.

“We have to keep looking for them. We can’t have Umbra on our planet. They eat too much.”

“I agree, but what do you want me to do. This isn’t just a hungry Umbra anymore. This is an angry Umbra,” Rafal said. “Accidental or otherwise, we just finaled his childe.”

“Find the female,” the Elder said. “She’ll be less dangerous. And once we have her, he should show up.” He paused. “But give it a couple nights. I want them to calm down. Then, check the town next to Nova. Take Decimus with you.”

“Will do.” Rafal said ended the communication.