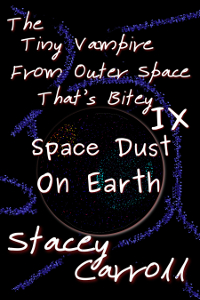 Marcus may have thought his biggest problem was ensuring that they didn't alert the humans to their food-creation and family expansion activities, while they worked on taking over Earth, but a new threat is on the horizon. The Space Agency wants to recreate Marcus' spaceship engine fuel, which requires massive amounts of space dust. The problem with that is that Earth's atmosphere doesn't kill a nervous system destroying bacteria that's present in the space dust. Can Marcus delay them until he can take over the planet or will he have to change Earth's atmosphere and hope he doesn't kill every living thing on Earth?

Shadow rolled over and landed on blankets. She huffed and sat up. She didn’t hear Marcus in the bathroom or downstairs. Shadow exited the bed and stepped into the hall. If Marcus left her here tonight, she was going to be livid.

Shadow walked into the expellation room. “What are you doing in here?”

“Examining these sacs. They were wet, and it was rather chaotic,” Marcus said.

“Are they okay?” Shadow asked as she walked over then immediately took a step back. She coughed and choked. “Those smell worse than the other two.”

Marcus laughed. “They got their stink back as they dried.” He held up the little one. “This is the little guy with the scar. I actually don’t think the knife went all the way through the sac.”

“Hell no.” Shadow took three more steps backward. “Those are gross. I need a shower just standing here. I can’t imagine what they’d smell like after 75 years.”

“I can’t either.” Marcus put the sac back in the rookery and closed all the lids. “I’m going to leave them here for a little bit. I’d prefer they be padded for a few weeks.”

“Fine by me,” Shadow said. “Just leave the lids closed.”

Marcus looked up to see Shadow standing in the hall. “I need a shower, but you probably don’t unless you really want one.”

“You want me to wash you again.” Marcus walked out of the expellation room and closed the door before leading Shadow into the master bathroom.

Shadow walked into the bathroom and huffed. “I had to walk myself.”

Marcus laughed. He walked over to the sink and washed his hands. “Oh, you had to walk on your own two feet. Just terrible.” He turned on the water to the shower. “I spoil you.” He turned around and kissed her.

Shadow slid her hands down his chest. He’d only bothered to put on sweatpants this evening. “Is that bad?”

“Not at all,” Marcus said. He enjoyed spoiling her and holding her but realized that he might have to slow down, especially since two of their childer were almost ready to be trained. They couldn’t see him carrying their female sire everywhere. It could be seen as a sign of weakness. Shadow wasn’t going to be happy when she realized that, but she would be happy here in a second. “Face the mirror and stay right there.”

Marcus took off his sweatpants and tossed them across the bedroom as he walked. Then, he opened the sidetable drawer and pulled out the small bottle of lube before walking back into the master bathroom.

Marcus lubed his mutto then pressed it against her little butt. He’d been waiting a week for this, and if it hadn’t been a week, it felt like longer than a week. He teased the opening.

Shadow inhaled. She knew he loved this type of sex, and he’d been incredibly patient while she held the sacs. Of course, it was his fault she there were so many. Ten in little more than a week.

“I find that arousing too,” Marcus said in response to her thoughts before he slowly penetrated her.

Shadow moaned. This wasn’t her favorite position, but she couldn’t complain much about it. Marcus felt good everywhere, and he tended to take his time when he was in this spot.

Marcus gently pistoned. When Shadow moaned, he increased his pace. Marcus grunted then groaned as he he released his seed.

Shadow shook and trembled as she orgasmed.

Marcus let out a satisfied sigh as he pulled out of her.

Shadow grinned. “Did you need that?”

“Yes, I did.” Marcus led her into the shower where he washed them both and rinsed Shadow.

Shadow stepped out of the shower while Marcus rinsed. She wrapped a towel around her hair and one around her body before walking into the bedroom to search for something to wear. “What are we doing tonight?”

“Is that in town or here?” Shadow asked.

“Here. Oliver built a lab last night or rather, the prior night,” Marcus said as he walked out of the bathroom with a towel wrapped around his waist. “Come here.”

“I’m not dressed,” Shadow said as she stepped in front of him.

“I don’t want you dressed. Not yet.” Marcus picked her up and kissed her. When she wrapped around him, he dropped his towel and lowered her onto his mutto.

Marcus fucked her where they stood, listening to her pants and moans before she finally screamed in pleasured bliss. He grunted then moaned as he blew again.

Marcus chuckled. “I thought you’d like that.” He kissed her again then set her on her feet so she could get dressed.

Shadow grabbed a red summer dress and slid it on, thankful that it fit. If there was one thing she was tired of, it was clothes that didn’t fit. She found her sandals under a chair and put them on her feet.

Marcus walked out of his closet dressed in black jeans and a black t-shirt with his athletic shoes.

“Space dust,” Marcus said. “I figured something a little less formal would be fine.”

Shadow hopped down the stairs with Marcus and walked into the kitchen.

“How many Umbra Ones do you need?” Marcus asked as he started to program their food.

“I’ll make you two.” Marcus ordered three Umbra Ones. He handed two to Shadow before draining his.

Shadow drained both her Umbra Ones. “I guess I was hungry.”

“I thought you were,” Marcus said. He examined her mouth then walked over to the sink, washed his face and soaked a couple paper towels. “Come here, drippy.”

Shadow walked over to Marcus.

Marcus wiped her mouth off and threw the paper towels in the trash.

“Probably in the lab. We took our time this morning,” Marcus said as he led her out the backdoor.

Shadow hopped along beside Marcus as they walked to the new laboratory.

Marcus opened the door, allowing Shadow in before him. “We finally made it.”

“Long evening?” Oliver asked as he shook a beaker of space dust.

“Long shower,” Marcus said as he walked over to the counter. “Do we know what’s in that space dust?”

“Some of it. I had to run it again,” Oliver said. “It’s mostly iron, carbon and silicon.”

“That could be useful,” Marcus said.

“If we had a hundred-thousand tons of it,” Oliver said as he walked down a row of heating beakers. “Ok, here’s one thing. “Mercury.”

“All of that gelatinous silver came out of that space dust,” Marcus said.

“It did. Six bags of space dust. One ounce of mercury,” Oliver said. “That’s toxic to the life here. Causes come type of poisoning.”

“Mercury poisoning,” Alera said from across the lab.

“Oh yeah. That’s right cause I commented on the lack of creativity too,” Oliver said.

“It’s this thing,” Alera said as she looked through a microscope.

“Did you finally find it?” Oliver asked.

“Finally. There might have been three of these things in all that space dust,” Alera said.

Shadow hopped over to look. She peered through the microscope. “Looks like a tiny rock.”

“And it’s small enough to be inhaled,” Alera said. “Once in the lungs it more of less travels everywhere. Causes widespread nerve damage.”

“No, the warm moist environment of living creatures allows it to multiply,” Alera said.

“What happens if we inhale it?” Shadow asked.

“We just hack it back out,” Alera said. “But since we don’t breathe unless we’re talking, we’re not even likely to inhale it.”

“Is that one alive or dead?” Marcus asked.

“It’s hard to tell. When they’re not active or traveling through space, they look like little rocks,” Alera said.

“Dump some iodine on that,” Marcus said.

“We’ll have to run this whole batch through an iodine rinse,” Oliver said.

“Now, the question is, how am I supposed to convince the space agency that microscopic rocks are a problem?” Marcus questioned.

“That is a good question, because until they’re inhaled, they are harmless,” Oliver said. “The mercury would be a better starting point. Then, tell them that in order to make the mercury more extractable, all the dust has to be ran through iodine.”

“Are you going to do that tonight?” Shadow asked.

“I doubt it,” Marcus said. “They can’t even get it here, yet. And, I would imagine they’ll call me once they can find a way to get it here.”

“How lethal are those things?” Shadow asked.

‘They don’t spread live thing to live thing,” Alera said. “But if there’s enough dust in the air, it can wipe out whole cities of living creatures.”

“So, if they dump that shit at the space station headquaters...” Marcus said.

“Everything around the headquarters could be affected,” Alera said. “And however the wind blows.”

“Now that we know what’s in that dust when it gets here, what’s the likelihood of them actually getting tons of it here?” Oliver asked.

“I didn’t see anything on the ship we were on that said they could collect much of anything,” Oliver said.

“Well, we need some plans in care they can collect it,” Oliver said.

“The most desirable plan is that we convince them to build a purification station next to that space station,” Marcus said.

“Wouldn’t that be a lot like trying to convince the Elders on Umbra and Chivitas that there’s a food shortage?” Oliver asked.

“Probably,” Marcus said. “The other option is that we retrofit Caesar’s spaceship to carry iodine, and we crank it into their atmosphere.”

“We’d have a better chance of that,” Oliver said.

“It would turn their sky purple and lessen the impact of their sun,” Marcus said. “All good things for us, but we have no idea what it’d do to their plants, which they and their food animals eat, and if they don’t eat, we don’t eat.”

“I see the dilemma.” Oliver contemplated. “You know what we need to do. We need to monitor their space communications to see if they’re even close to being able to capture space dust.”

“Because they would have to tell their ships to collect it,” Marcus said.

“You got it,” Oliver said. “That’s not going to be a quick process.”

“Give me a couple hours. I’m going to build an observation and listening building,” Oliver said. “Then, I’ll replicate the communication equipment.”

“We don’t want them to be able to find us,” Marcus said.

“I’m going to replicate the stuff that make sure they can’t find us too,” Oliver said.

“Should we build it underground?” Marcus asked.

“Do you want me to build a tunnel between the two houses?” Oliver asked.

“Let me build the tunnel. You work on replicating the components,” Marcus said.

“Come on, tiny. You can help.” Marcus picked up Shadow and walked out of the lab to the stone house.