The Lumberjack and His Wood (Naughty Reads 9)

The Lumberjack and His Wood (Naughty Reads) 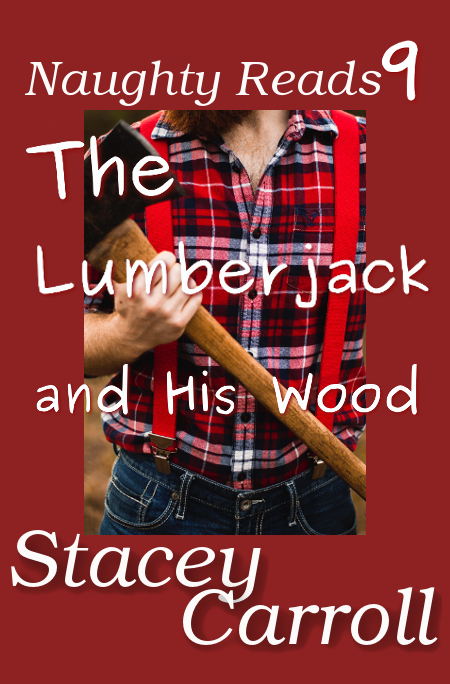 Jane Woodland is on a hiking trip to clear her mind and determine what to do next with her life when she wanders off the trail to find some purple-leaved trees. Unfortunately, she wonders so far off the trail, she gets lost. Luckily, there's a lumberjack cutting down trees. She locates him by the sound of his chainsaw, hoping he can give her directions back to the trail, but it's getting late. After traveling to his cabin for the night, she quickly discovers the trees aren’t the only things with big wood.

The Lumberjack and his Wood - sample

Jane Woodland finished setting up her tent and campsite. She had all the latest luxury camping amenities. A portable bathroom. Shower. And kitchen. And she’d brought plenty of food in a cooler. She needed a break. As the head advertising exec at a major fortune 500 company, the work was overwhelming, so much so that she hadn’t had time for herself in over five years, much less an actual vacation away from the city. She was lucky to be able to get in a spa day on the weekend without getting interrupted by work. In fact, if she had a fucking dollar for all the times her boss had interrupted her on a day off and demanded she go into the office, she’d own a much bigger house!

She was sick of it. Of course, the money was good. She made over six figures a year, and it was high sixes, but still. She needed a break and worked it out with her boss. She’d get three weeks off, and Jane intended to spend them in the woods away from everything. She even brought a rifle in case she had to hunt and forage.

Thankfully, one of her hobbies was hunting and rifle shooting. Not that she had gotten much time to do either one in the last five years, but she knew how to prepare small game and turn it into food. Though, she’d brought a massive cooler, so she didn’t expect to have to hunt.

Jane laid back in her tent cot. She was reasonably clean for just having setup the entire camp. She’d washed her hands in the bathroom. She had a sink that was fed from a large jug of water and a composting toilet. She planned to go hiking and view the nature and trees. This area was known for its rare purple leaved trees, and she wanted to see a few before making dinner and settling in for the night.

She’d stopped for a hamburger and french fries and gotten a few bags of chips, some Cokes and a couple cases of beer at the last small town before her destination. The prices were higher than she liked, but it was her fault for not remembering to get those things in the city.

She stretched and sat up. If she wanted to go hiking, now was not the time for a nap. Jane grabbed her camera and a small bag with some granola bars and water. She stood and walked out of her tent then zipped it shut to prevent any wildlife from entering it. She didn’t need to wake up with a snake in her bed or a raccoon munching on her trail mix.

Jane hefted her bag onto her back and walked to the trailhead. This was Mountain Pass 1, a ten-mile circular trek that would take her slightly behind her campsite, but she thought she’d still be able to see her tent upon exiting the trail on the other side. The purple trees were supposed to be on this route.

She had a lot of thinking to do. She was over thirty. Single, and no kids. This wasn’t how she saw her life. All work and no play, family or friends. It was depressing. She couldn’t maintain a relationship for longer than six months, and her last relationship had imploded. She thought she’d have a family by now, and if she waited much longer, it wasn’t going to happen. But no male had been able to tolerate her work schedule. Hell, she wasn’t even sure when she’d find time to go to a doctor, much less have some damned babies. Having it all wasn’t as damned easy as it sounded. She had her job and money, but that was all she had. It wasn’t enough.

Jane hiked the trail. It was interesting. The trees were huge, not at all like the ones in the city. They had large trunks, long limbs and plenty of leaves, but the trees at this end were green. Jane was going to be pissed if the brochures lied, and there were no purple leaved trees.

Jane checked her watch. She’d spent a lot of time taking pictures of the bushes and flowers and thinking. She planned to do a full expose` on her trip to the mountain forests once she got home. Jane didn’t mind nature. In fact, she loved to be outdoors. If she thought she could make a living blogging about her outdoor adventures, she would have quit her job yesterday. Unfortunately, she didn't know how much articles about outdoor experiences were worth, and she didn't know the first thing about creating a website. Though, she supposed she could learn.

It was almost five in the evening. She needed to get back to her campsite and make dinner. Looking for the trees would have to wait until tomorrow morning.

She arrived back at her campsite just after six. Hamburgers and french fries sounded like a good dinner, so she pulled out her skillet and camp deep fryer.

Her propane camp stove didn’t take long to cook the hamburgers, and by the time they were done, her french fries were done. She dressed up her hamburger with lettuce, tomato, onion, jalapenos, cheese and mayonnaise before adding ketchup to her plate and sitting down at her pop-up picnic table to eat.

It was dark by the time she finished, but all she had to do was press a button on her phone, and her camp lit itself. The tent came with lights that were app controlled.

She washed the dishes then took a quick shower in her camp shower before heading into her tent to relax and sleep.