The Venery of Bigfoot 1 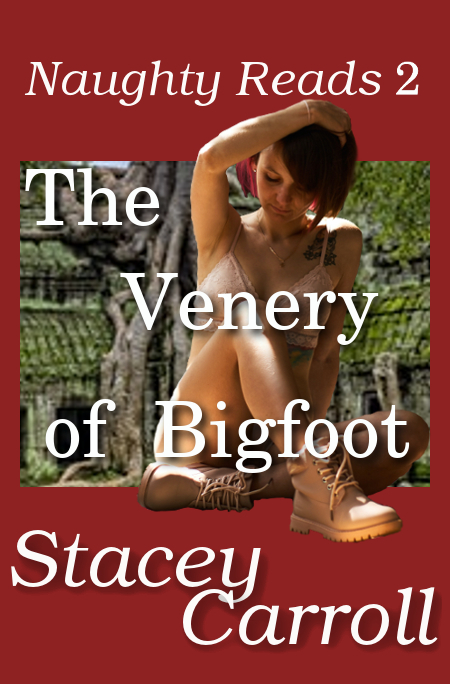 In an effort to solve the health crisis of Betaism in male humans, Kitty Adroit is on the hunt for Bigfoot, who is presumed to be the most alpha male on the planet. She thinks an infusion of bigfoot DNA will complete her serum and turn beta males into ultra-productive, big-dicked alpha males, who are ready to be super-providers and keep their women *satisfied*. And she can't wait to feel those big alpha dicks pumping inside her.

When the light turned green, Kitty Adroit stepped on the gas. She was a mile from the Gene Institute where she’d been researching a newly coined genetic flaw – Betaism. It was slated to be the worst problem since Ditsy Syndrome, which they’d solved nearly five years ago. The Institute could now say they’d successfully treated over a million women between the ages of 20 and 40. The injections were priced between $1,500 and $20,000, depending on who was ordering and the name of their medical insurance company. It was a billion-dollar industry, but it’d also created a new problem.

These newly intelligent, career-minded women couldn’t find mates, and if they were married, they were now divorced. Kitty didn’t feel bad about it. The injections stopped these women from being hair-flippy, flashy boobs that only cared about when the next Louie Vedot handbag was going to be released.

They now owned businesses, or if they were working for someone else, they were achieving promotions at an astonishing rate. The arts and crafts scene was thriving. Another benefit of the Ditsy Syndrome injections. The women that weren’t in business were crafting and creating art, doing their own projects.

The economy was now thriving with all these new women entrepreneurs, but the dinner conversations were terrible. These women would go home, greet their husbands or boyfriends, sit down at the dinner table and start talking about their latest projects, only to have their male complain about how hard they were being worked and how they just couldn’t get ahead because of X, Y or Z. The worst excuse she’d heard was a woman describing her new boyfriend’s terrible day at work. His digital pencil broke, and after that, he couldn’t be bothered to do anything. Eventually, he complained of a stomach ache and got sent home for the day.

Kitty had rolled her eyes. This was classic Betaism, and fixing Ditsy Syndrome had exasperated the problem. Kitty had the same problem, but it wasn’t because she was recently cured of Ditsy Syndrome. She’d never had it. She’d always been goal-oriented, and she’d always had trouble finding a male that was worthy of her. Or at least, not a complete pansy-ass with a limp dick.

Kitty had just thrown her last boyfriend out a week ago. This car had broken down. She’d managed to get it to the side of the road. It automatically called for a tow truck, and she called Jim to pick her up.

Well, he just couldn’t. He was in the middle of an intense World of Fritters battle with his ‘Bros’ and couldn’t leave the game. They were counting on him to throw the hot oil so they could advance into the flour-atorium and take the coveted cream cheese mix. He’d quickly told her to ride to the shop with the tow truck driver. Then, drive home once the car was fixed, oh, and he had to go. His Bros needed him. A jelly monster had just appeared, and he was running low on powdered sugar.

Kitty had blown a gasket. She did ride to the mechanic’s shop with the tow truck driver. Then, she’d called a Super Ride to take her home. Instead, of letting the Super Ride driver leave, she tipped him extra to wait while she threw her beta male out on the curb. The benefit to calling Super Ride was that they all had extended bed trucks. It was a requirement to drive with the service.

Then, Kelly proceeded to throw all of Jim’s shit, including his coveted computer, onto the front lawn. She was done. Of course, he cried and screamed and wailed, thinking that would change her mind. It only made her more angry, and she told him that if he kept that shit up, she’d grab the sledgehammer out of the garage and smash his precious computer to bits.

The next morning, Kitty had the locks changed on the house.

That hadn’t been her initial plan. She wanted to test the Betaism serum on him, but it wasn’t ready, and the last trial has caused some very unwanted side effects. Ear and nose hair growth. Terrible body odor and erections that lasted for two weeks. It was the last side-effect that concerned them. The erections didn’t just form. They kept growing, causing the men to pass out. It had required an emergency genetic flush to rinse the serum from their cells.

The serum was out of their systems, and now The Gene Institute’s doctors were working around the clock to erase over a thousand men’s memories of the research trial, medication and after-effects. The higher-ups were not pleased, but it had resulted in Kitty getting the OK to continue her Bigfoot research. And, if she found him, she was cleared to travel.

Kitty firmly believed that what they needed was the addition of super alpha male genes, and since Bigfoot was slated to be a male of the neolithic period or a holdover from it, he was the biggest, baddest male on the planet. They just needed to find him.