Naughty Reads 8 The Venery of Bigfoot 5

The Venery of Bigfoot 5 (Naughty Reads) 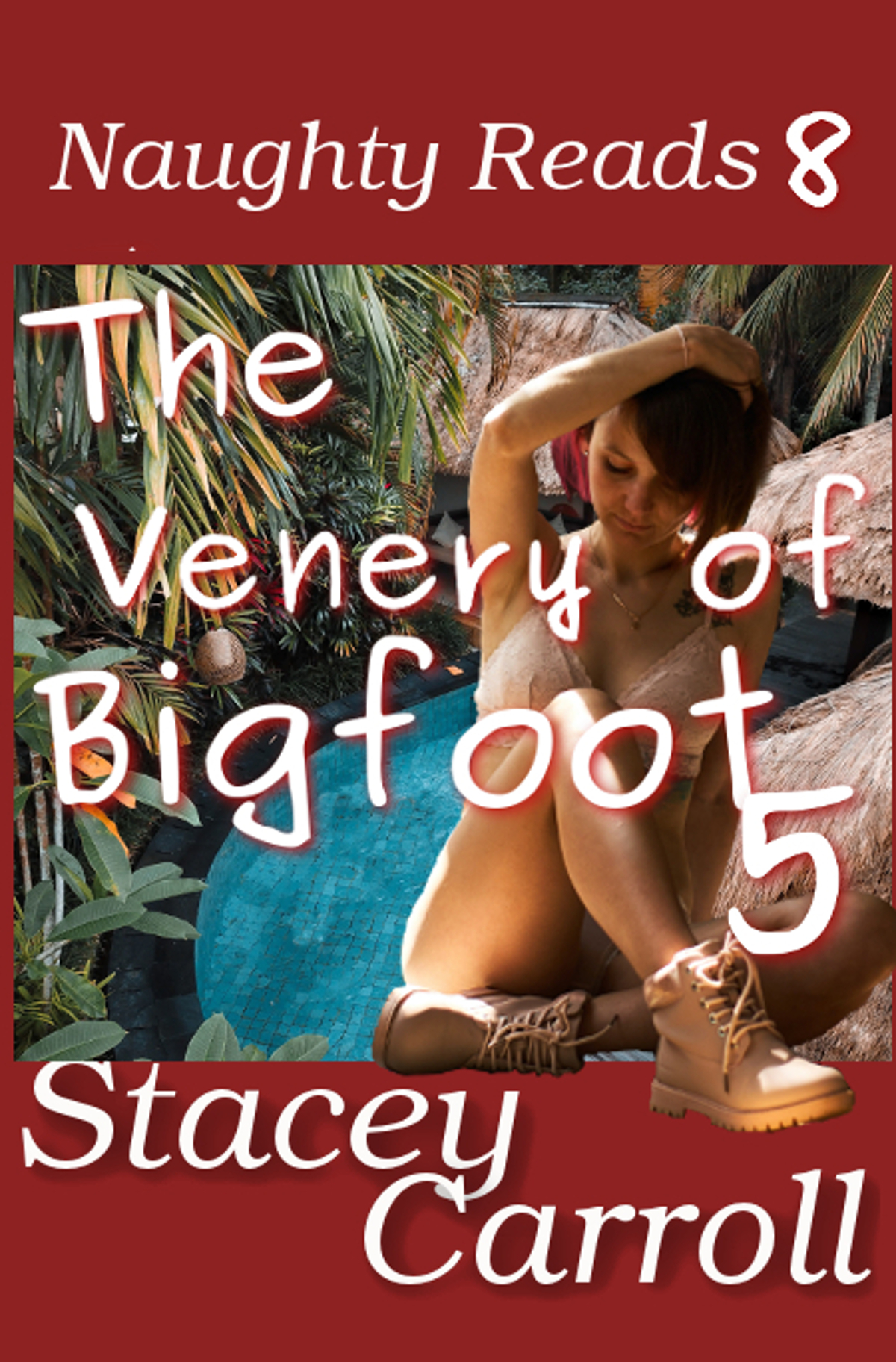 Kitty and Marc are on a mission to create bigfoot birth control before everyone male who took a betaism injection gets their girlfriends and wives pregnant. They're hoping a trip to Kitty's grandma's house will provide the information they need, especially if grandpa bigfoot is still alive.

Kitty rolled over onto Marc. She expected to feel fur. Then, she remembered they kept him shaved.

“You okay?” Marc asked as he opened his eyes. She didn’t seem to be laying on him correctly.

Marc chuckled. “That’s all gone. It’d probably take me a month to regrow it.”

“I think you’re still asleep,” Marc said. He pulled her against his body. “It’s still early.”

Kitty settled against him and fell back asleep.

Marc let her sleep another hour. He was just about to get out of bed and feed Little Fuzzy when he heard feet running down the hall.

Kitty opened her eyes. “Was that Little Fuzzy chanting ‘fish’ down the hall?”

Kitty laughed. “I guess we better get down there.”

Ten minutes later, they were dressed and walking into the dining room. Little Fuzzy was eating his fish and berries.

“I managed to find him a fish for breakfast,” Mary said.

“You made his day,” Marc said as he sat down at the table.

“What’s he wearing?” Kitty asked as she sat across from Marc.

“A little pair of sweatpants,” Mary said. “Can’t have him running around with his doodle out.”

Kitty and Marc both laughed.

“Well, probably best he gets used to wearing clothes now rather than later,” Marc said. “Did you manage to get him into some shorts?”

“No. He didn’t like the shorts. I’ll have to find some softer ones next time I get to town,” Mary said. “But he didn’t complain during his bath, and did he did put on the sweatpants.”

“How are the other two?” Marc asked.

“Washed and fed. I found some blocks for them to play with,” Mary said as she placed their plates in front of them.

Kitty ate her scrambled eggs, bacon, toast and potatoes o’brian. “Has anyone looked outside?”

“This place has a generator, right?” Kitty asked.

“A big one,” Mary said. “And about two-thousand gallons of gas.”

“That’ll run for a while,” Kitty said.

“How do they refill the tank?” Kitty asked.

“They roll a truck like the ones you see at the gas station up to the tank,” Mary said.

“It’s seamless. Once the power goes out, we flip a switch. The generator fires, and everything comes back on,” Mary said.

Kitty finished eating. “Well, sounds like we’ll be fine. I guess I’ll go downstairs and work on this project.”

“I’ll take the fuzzies out to play in the snow,” Marc said.

Kitty stood and started to walk out of the dining room.

“Were you going to track down your grandma?” Marc asked.

“Yes. Thanks for reminding me. I’ll do that first,” Kitty said. She walked upstairs and grabbed her address book from on top of the dresser and flipped through it. She had no idea if she had up-to-date information for her grandma. Kitty hadn’t talked to her in years. If she had a cell phone number, there was a chance it still worked. If it was a landline, she knew there’d be no chance. The last time they’d talked was before she moved to Florida.

Kitty found two numbers under her grandmother’s name – Ester Adroit. Kitty studied both numbers. The top number was the one she usually called, and she didn’t remember writing down the bottom number. Kitty picked up her cell phone and dialed the top number. A man answered. “Yes, is Ester Adroit there?”

“I’m sorry. You have the wrong number,” he said.

“Thank you.” Kitty ended the call and dialed the second number. It rang six times before a man answered. Kitty inwardly cursed. If she had two bad numbers, it was going to be hell tracking down her grandmother. “Yes, I’m trying to reach Ester Adroit.”

“She’s right here. Who may I say is calling?” he asked.

“Kitty Adroit.” She heard the phone being passed.

“Kitty, is it really you?” Ester asked.

“It is,” Kitty said. “Was that your new boyfriend?”

Ester laughed. “Sorta. Anyway, how are you?”

“I’m good,” Kitty said. “I realized we hadn’t talked in forever, so thought I’d give you a call.”

“Well, I thought I might like to visit. I have a new fiance I’d like you to meet,” Kitty said. She noticed a strange paused, and it sounded like her grandma had put her hand over the mic. “Grandma?”

“That would be wonderful. When do you plan to visit?” she asked.

“Of course. Let me give you my address.”

Kitty wrote down the address in her contacts book. “Got it.”

“Do you know what day?” Ester asked.

“I haven't had to deal with snow in years,” Ester said. “You’ll love it down here. It warm and peaceful.”

“Sounds great. I’ve been dealing with nothing but snow for months,” Kitty said. “First in the mountains and now here.”

“Yeah. It was for work,” Kitty said. “I’ll tell you all about it when we get there.”

“Well, I’ll see you when you get here,” Ester said.

Kitty ended the call. She had a weird feeling. Her grandma had paused too many times. Kitty put on her socks and shoes and found her jacket and gloves before walking out of the master bedroom, down the stairs and out the back door.

She started to look for Marc and the cubs then laughed. The little cubs were buried in the snow and Marc was building some sort of snow hill while Little Fuzzy was packing snow on with his hands in an attempt to help. “What are you doing?”

“Playing snow fort,” Marc said. “This is the main building.”

Kitty walked over and looked down at the little cubs. They were about half the size of Little Fuzzy. “Can they move? How many layers are they wearing?”

Kitty picked one up and put it on its feet. It squealed and waddled over to the snow pile. Kitty did the same this the other one. “They can walk.”

“Small Fuzz!” Little Fuzzy pointed to the younger cubs. “Big Fuzz.” He pointed to himself.

Little Fuzzy inhaled and spread his arms all the way out. “Huge No Fuzz!”

“He’s too little to remember the cliff dwellings,” Marc said. He turned to look at Little Fuzzy. “Are you going to show the other two how to put snow on?”

Marc walked over to Kitty and kissed her while Little Fuzzy walked over to the pile of snow and started showing the other two cubs how to put snow on the sides of the hill. “He’s really coming along.”

“Is he talking your ear off?” Kitty asked.

Kitty grinned. “Well, I got a hold of my grandma.”

“She said to come on down,” Kitty said. “But it was a weird call. A man answered the phone. Kinda sounded like grandpa. I asked if she had a new boyfriend, and she dodged the question.”

“I’m not surprised,” Marc said. “What else was weird?”

“She paused several times, like she was talking to him but didn’t want me to hear,” Kitty said.

“Not surprised. If he’s still alive, they’re probably trying to figure out how to have you down for a visit and keep him hidden,” Marc said. “And they can try, but it won’t work. Bigfoots have a smell, no matter how much they wash.”

“I don’t smell anything different about you,” Kitty said. “I didn’t in the forest either.”

“You’re not paying attention to it,” Marc said. “It’s not a huge smell either, so it’s easily ignored unless you know what you’re smelling.”

They both turned their heads when Little Fuzzy started yelling.

“Oopse. They got avalanched.” Kitty ran over and dug Little Fuzzy out while Marc dug out the other two. She picked up Little Fuzzy. “I think it’s time to go inside.”

Kitty walked inside with Little Fuzzy. “We need hot chocolates all around.”

Kitty sat Little Fuzzy in a kitchen chair and took off his socks. All four pairs of them. “I guess he needs some shoes.”

“Yeah, I didn’t have any shoes to put on him,” Marc said. “Not the other two either, so I just put on a lot of socks.”

“I can get shoes when I go into town,” Mary said as she took the milk out of the fridge.

“Milk!” Little Fuzzy reached for the jug even though he was nowhere near it.

“These two are fine,” Marc said as he finished taking off their clothes. “Do you need to work?”

“I’ll look after these guys, and I’ll bring your hot chocolates down,” Mary said.

“Thanks,” Kitty said. She walked downstairs to her lab with Marc.